Thank you Don for the “Pocket Computer Newsletter” archives !

I subscribed to Pocket Computer Newsletter in 1982 and was able to get back
issues of 1981.
I was interested in Machine Language for the PC1500.
In 1982 PCN was the only information available.
The Sharp Technical Reference Manual was not yet out.
TRS80 Microcomputer News started revealing the mnemonic codes in March 1983.

The last issue of each year of PCN has an index.
For those that want to learn PC1500 ML, search the index for articles by
Norlin Rober.

Thanks to the hard work of Norlin Rober, PCN had the first info on ML
programming the PC 1500.
They called the command set Rober Mnemonics.

He later offered it written in ML, named LMD 2.0
(Loader/Monitor/Disassembler 2.0).
A must have program!

In 1983 PCN had a series of issues called “Machine Language Programming the
PC1500”.

I begin a new article type : Tape of the week.
Months after months i have found software on tapes and will offer you these oldies 🙂

This software comes from Switzerland, a hundred kilometers from home.
The tool kit V1.1 is written by Urs RIBI from the URSoft company. 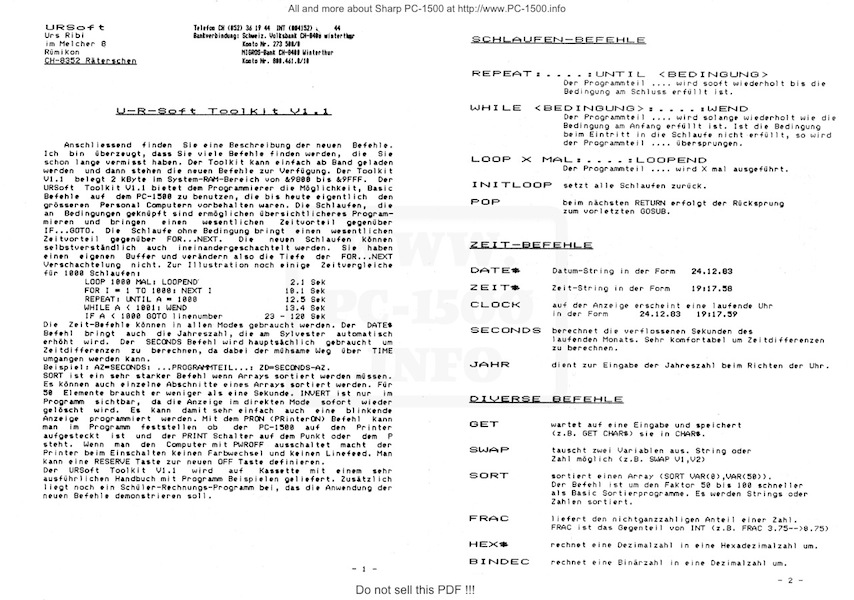 This kind of package is rare and each time it’s a real pleasure to discover new keywords.
This one may be inspired by some PASCAL language.

You can download the files here : Package and Manual
There is a special file named URSOFT.KEY in the package. It’s to use with Torsten’s software WAV2BIN and this adds these new basic keyword when converting a Wav file to Bas file. 😉

In the manual you will read something about a TOOL KIT V2.
If someone own this kit and want to share it with us… please contact me 😉

If you want to learn what’s in the system ROM then you must know H.-G. Schliecker publications !
Do you remember the “PC-1500 INTERN” with the whole disassembled and commented ROM ?

Today i have something all the assembly language programmers are dreaming to :
“SHARP PC-1500 ROM Unterprogramme I“. When learning machine language programming you discover that there are 128 system routines you can directly call by short instructions. For example, some ones can handle Basic tokens and their parameters, others can execute mathematical calculations on real numbers…
But who knows all the 128 routines ?

This very rare paper describe all of them with calling parameters but it’s in German language 😉
As it’s named “ROM-Unterprogramme I” i suppose that a number II exists somewhere…
Maybe one of you can help me to find it ? 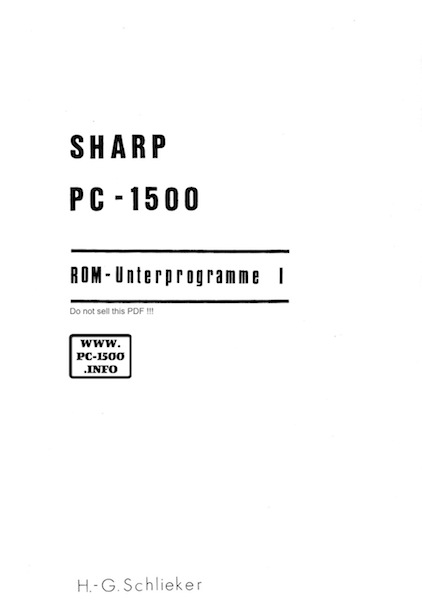 Here is another document from Reiner PUCH.
If you want to write Basic keyword yo must read this… after translation from German.

It explains how to give a code your new Keywords and it’s relation with the PU and PV cpu flags. 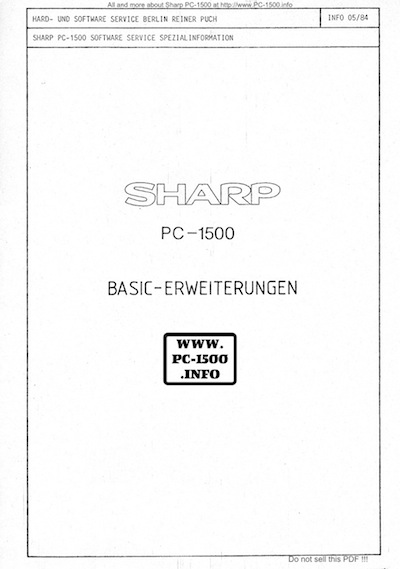 Can someone translate it ?
And if you own other documents from Reiner PUCH please contact me.

That’s crazy, i can’t find the “Pocket Computer Newsletter” magazines anywhere !
But i have some articles about the PC-1500 extracted from it.

Here is the first part with issues 13 to 28.
You’ll find issue number at the bottom of each page. 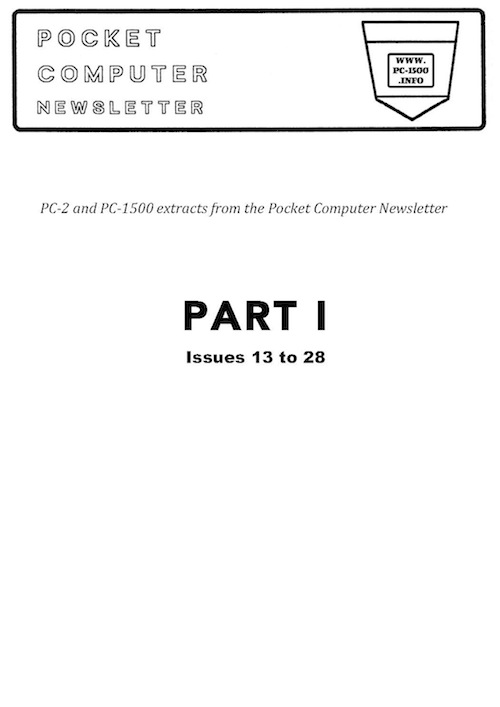 If you own the original magazines, please, contact me.
Maybe would you accept to offer it, sell it or send high quality scans…

With CGH programs you have perfect tools to build programs for your PC-1500.
Writing a program in ML (Machine Language) is hard to do and the best is to use some existing code.
The best library is the system ROM (Read Only Memory).
There is a lot of useful routines that will help you.

Some of my documents are from the early 80’s and written by Reiner PUCH.
Here is a list of really interesting ROM routines : 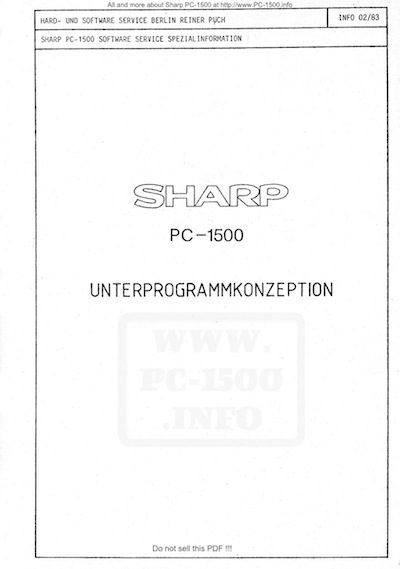 Thank you Herr Reiner PUCH !
If you have same interesting papers please contact me.

I’m sorry, the link to the PocketTools package was missing from my article !
It’s now ok and it point to the Release Candidate 4 version.
Back to the article : http://www.pc-1500.info/2015/03/21/torsten-mucker-save-your-tapes-with-wav2bin/ 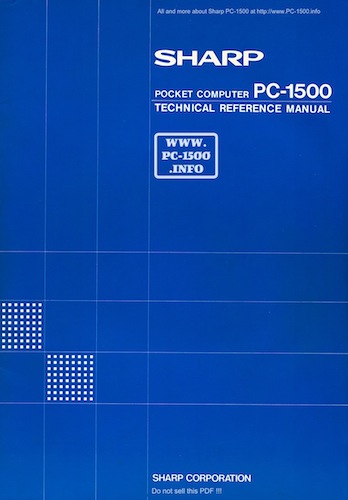 – Christophe, can you tell us some words about you ?

I discovered the “computer world” in june 1980 when I received a TI-58. So, my first steps were the TI-58 language, close to the assembler.

After, I bought a Texas TMS169/199, a single board computer, where I play a little with the University BASIC, but also with UNIBUG monitor. I say that I really learn assembler with it. This was in middle of 1981.

The PC-1500 comes in the last days of december 1982. I chose the PC-1500 for the unique reason that the assembler was accessible and also some french magazines (L’Ordinateur Individuel, L’Ordinateur de Poche) were speaking about the first MCODE discoveries. After I became a member of the SHARPENTIERS and I also got access to some TRACE reviews, thanks to a schoold friend who owned a TANDY PC-2.

I always said, that I never really used the embedded BASIC. I only worked in machine language on my PC-1500. I have bought the PC-MACRO software with its monitor PC-HEX, and after I discovered the BEST of ALL: XMON written by Philippe GAC. Today, 30 years later, I own several PC-1500, and all have a XMON image inside.

On my view, I believe that the PC-1500 was really the best pocket computer ever built. Graphic, Music, powerful BASIC, assembly access, … and now, fully documented and of course, a very great built quality.

– Our friend Emmanuel is hosting some of your freeware tools on his historical website www.PC1500.com. Can you tell us more ?

I started in 2012. I had really time to do a pass on all my softwares and write a sample README to document it.

– Ho much time do you allow each month to these tools ?

No really slot time allowed. It depends of the time I really have, but also the ideas and of course the motivation !

– You told me about some threads you want to start in the forum… would you explain to our readers ?

This will to present the lhTools project 0.8.0. And also the got some ideas, remarks, critics or suggestions from the forum members. But, I miss time in these weeks…

Yes ! Thank to you to invite me in the team 🙂 What I expect ? Trying to build with the team a new powerful extension to keep the PC-1500 alive ! Big RAM, big screen, with several softwares available in ROM. A nice way to learn more about the internals.

It is also the best motivation for me to continue my developments: MACBAS-2014, but also and more, the new lhTools are dedicated for the 1560. MACBAS as “ROM”able software, and the lhTools as cross developments tool chain and emulation.

The BASIC is very easier to learn and the documentation is real exeception, very well written. So, for someone who want to got a nice computer with a “long story”, it may be a good start. Remember, that THE PC-1500 was one of the first “8-bits” pocket computers and certainly the first with a graphical access. It is a major actor of the pocket computer story.And, it is still alive… just reading all informations and articles provided by www.PC-1500.info !

Thank you Christophe and welcome on www.PC-1500.info !

Thanks to Bruce ELLIOTT for his articles in the TRS-80 Microcomputer News magazine !
If you want to start programming in machine language (ML) this is the paper to read.
I have grouped all the 6 article in a single pdf file : 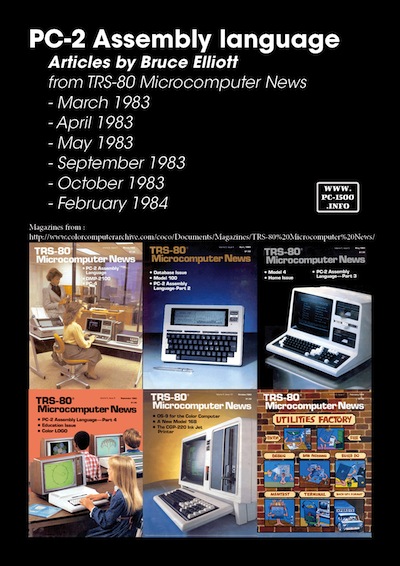