As the french “Le Sharpentier” we can find other Sharp clubs in many countries.
Today a friend presents the SHACC (Sharp HAndComputer Club) club from Holland and it’s club magazine AREAD. 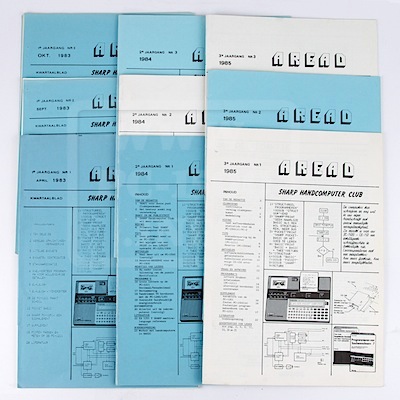 SHACC: the SHARP Handheld-Computer Club in the Netherlands

Long before the world’s first real pocket computer – SHARP’s PC-1211 – was introduced, I had established a regular cooperation with the brand’s representative in the seventies. The focus then was on their calculators. When the revolutionary EL-5100 appeared, it seemed obvious, that SHARP would/had become the leader in this field (in fact overtaking HP and TI, still caught-up in their RPN vs. AOS war).

But it was not until the PC-1500 in the early ’80s featured all the functionality and connectivity required for a real computer-system, that professional interest arose for the pocket computer – eventually the model was rightfully crowned “King”.

The SHARP brand in the meantime had got its own official importer, SHARP Benelux (i.e. for Belgium, the Netherlands and Luxemburg). Shortly after the introduction of the PC-1500A, a few independent pros met with the SHARP management, and decided to start SHACC. Our goal was to exchange ideas for applications that could lift the ‘pockets’ from the almost insulting level of the “BASIC-programmable calculator” as they were called in those days. We endeavoured to learn from each others experiences shared tips & tricks, etc. SHARP supported us in many ways, not least bymaking available to us most of the info from the Service Dept. in  Hamburg (the head office for the European Continent, in those days).

It wasn’t long before we had more than 200 members: professional application designers, student programmers, and corporate users. We had a number of members in Belgium and Germany, and one of our members who had frequent business contacts in France, brought back these wonderful French magazines from his journeys.

One German member, living in The Hague, and I brought a whole range of products from the rich German ‘scene’ to our country/members, varying from programs and add-ons/add-ins, to books. There were very few ‘clashes’ between these 3rd-party commercial activities on one side, and the interests of SHARP, or other companies involved.

The most outstanding product probably was the navigation software, Navipack. It came in three EPROM-modules, and made the PC-1500(A) the world’s most accurate navigation tool, at the same time providing the tidal data of 800 ports around the world ! Developped by a Dutch math professor, it is still in use today.

The most intricate application award for the PC-1500A must go to the Nestle production plant for milk-powder, where one (1) PC-1500A (via a multiplexer) monitored and controlled 5 weighing-doseing units plus a printer. For this task, the Swiss manufacturer of the weighing-doseing units had specified 5 full-fledged PCs. The MC-6800x microprocessors in the Swiss units fired their data at a rate of several MHz to the poor PC-1500A. Not being fluent in machine-language programming I had to overcome this huge speed gap in BASIC ! (Knowing something about the probability in information theory does come in handy in a situation like that …).

These are just a few examples of the many projects that came about through SHACC. So why did SHACC stop, you might ask. More than one reason: first, SHARP discontinuing production of the PC-1500A, and later the organizers taking over from the ‘pockets’ (i.e. the models that could accomodate a BASIC Card). And then there was the problem every club gets to deal with sooner or later: diminishing ‘input’ for the club magazine, which, in effect, is the binding factor. The hardcore members kept in touch for a few years afterwards and than it was over.

Contact me if you are looking for the Navipack package. I will ask my friend for details.

And he offers us this cartoon by world-famous Dutch cartoonist CORK (Cor Hoekstra), who was a personal friend of R.B. 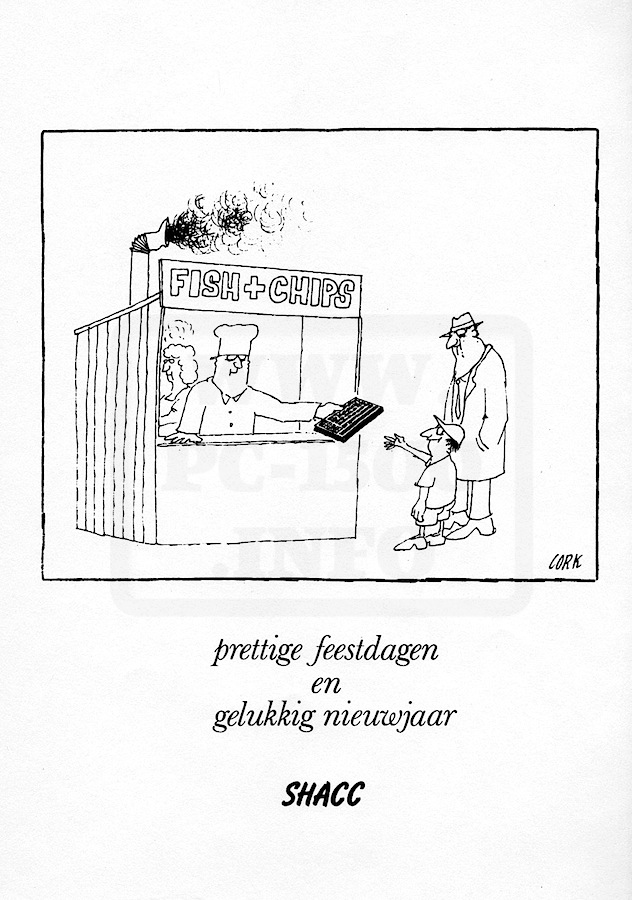